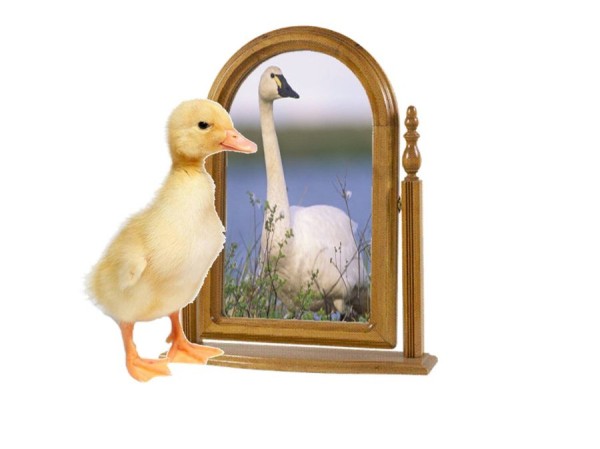 Ok, but if nobody is telling you nice things, why not start it yourself? Do it in whatever form you think it’s appropriate: send yourself emails, write in your calendar or leave yourself nice post- its on the desk. With something nice just for you.

I know it sounds awkward and, to some extent, it is. But it’s also very useful. And you know why? Because you are already telling yourself stuff, only you don’t do this consciously. You’re telling things to yourself in your mind. All the time.

Taking this process outside of your own mind, putting it on paper or making it visible in some form will only “make it legit”. And the most important part is that you will start to exert some form of control over it. As I said, most of the time you’re telling stuff to yourself unconsciously. Usually, bad stuff.

Do yourself a service and send future message to the future you. Again, you’ll be surprised how such a simple thing could change your mood so deeply.

Or ridiculous. Talking to yourself consciously is usually considered a form of narcissism. Or, you know, something pathological. In many cases, it is. There’s a subtle limit between talking consciously to yourself in an non-abusive, unobtrusive way, and getting delusional. Here’s a short guideline that helped me when the going got though.

Try to play “the replacement game”. Try to replace the “I don’t think this is gonna work”, for instance, with “I do think this is gonna work”. It’s a simple substitution game, very easy to understand, but quite difficult to implement. Because we have no idea how deeply wired these talking habits are in our brains. To play this game you really need a lot of presence, a lot of awareness and a certain penchant for playfulness. It’s really just a game, after all.

2 Talk With The Avatar

It helps if you don’t see yourself like a real person. If you try to do something important, to finish a project, for instance, try to detach from your own perspective and visualise yourself like an avatar in an adventure game. Imagine you have the controls for moving froward, backward, for picking up goods and so on. And talk to that avatar in such a way that he’ll finish that project. Again, I know this feels awkward, but it works.

This is part of the journaling thing that I talked so much about it. Every journal is in fact just another form of self-awareness, of self-dialogue. You write about yourself and it’s you who reads it. So, try to write in your journal parts that are nice about your life. Try to remember pleasant things, situations, contexts or gestures. Describe them in detail.

If you can’t say something nice about (or to) yourself, at least try to eliminate judgement. Don’t call yourself names, don’t hurt yourself with words. If you do talk, try to resume to facts, to situations. Don’t jump to conclusions. This is especially useful during crisis, when you’re under pressure. It’s one thing to be responsible for something and another to embrace guilt and punish yourself.

If you do just 2 or 3 out of these, you’re on the right path. We’re all different and what works for me may not work for you, but at least you have something to start with. Discover your own approaches, your own ways to talk to yourself.

Just keep it at the “nice” level.