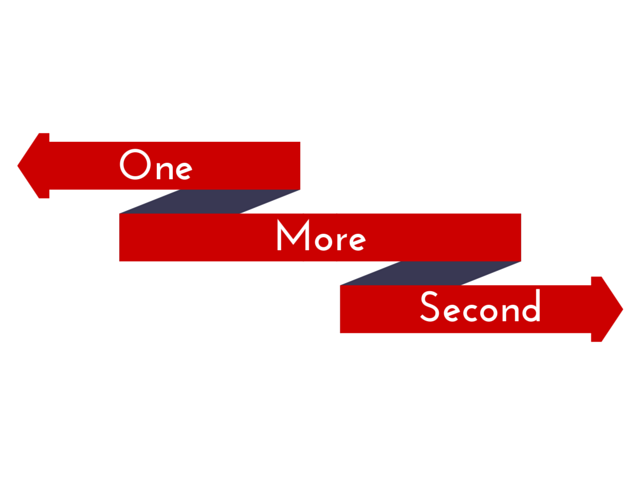 Create the habit of looking at things for one more second. Spend one more second before taking an important decision. Delay something. Time will follow your intention and open some unexpected windows for you. Slow it down a little.

This one more second will stretch the time in your favor. Acting too hasty is often the source of a lot of trouble in our lives. Slowing down a little bit will significantly lower this possibility.

Look at everything around you one more second. And be amazed by what you will discover.

What Happens If You  Add One More Second To Everything

I started to notice this many years ago, when I was still a busy entrepreneur. Back then, I had to manage many processes during a normal day, and that put quite some pressure on my time. Up to the point I kinda immersed totally in my to do list, crossing off tasks maniacally and lost connection to what we call “flow”. I was so caught up in what I had to do, that I literally created a parallel world in which I was spending most of my time. If you look carefully at the busiest people around you, you’ll notice the same pattern: they look at you with an estranged expression, like they’re trying to make contact with an alien species. I was literally living in a parallel universe.

Then, one day, out of boredom or just because I was really tired, I kept my eyes on a building in front of me, one more second. Like, you know, the moment when you want to take your eyes off of something, you just don’t. You stay there, staring, one more second.

The sensation was almost frightening. The building seemed all of a sudden clearer, the colors crisper, the edges carried more light. I know it sounds like I make things up, trying to sugar coat some delusions. Well, it wasn’t delusion. Because, after the initial surprise – and, in all honesty, after the assumption that I may have been under the empire of some fatigue induced delusion – I decided to repeat with other objects. Or beings. And the effects persisted. Everything seemed clearer, crisper, lighter and I even had some strange sensation of freshness in my breathing.

So, I started to do this on purpose. I started to “stare” at things. There’s a little bit of technique to be learned about this. Because it’s kinda tricky to establish when “one more second” is one more second. If you want to look at something for as long as you want, when you decide what it takes to have “one more second”? How you identify when “enough is enough” and you want to take your eyes off of that object? Well, that tiny moment, that microsecond when you just want to move your focus, that second has to be mastered and you just send yourself a “command” to stay more. One more second.

Little by little, I learned how to look at things and really notice them. How to be aware of their presence. How to delay my focus shift enough to perceive their shapes and colors and volumes.

What happened after I learned to do this was that my parallel world started to shrink. I didn’t spend as much time in it as before. Because, obviously, I didn’t have time for that. The time I was usually spending in that world was now scattered all over tiny “one-more-seconds” in this world, in the present. There were no more seconds left for the parallel world.

And, as I was anchoring myself more and more in the present, the present started to get more shape, more function and more gravity. It was like those tiny seconds were adding up, creating a gravitational field more and more powerful. At times I could feel how this “immediate world” literally pulled me towards it, extracting me from the universe of “to-do” and “milestones” and “projects”.

And all it took was one more second.