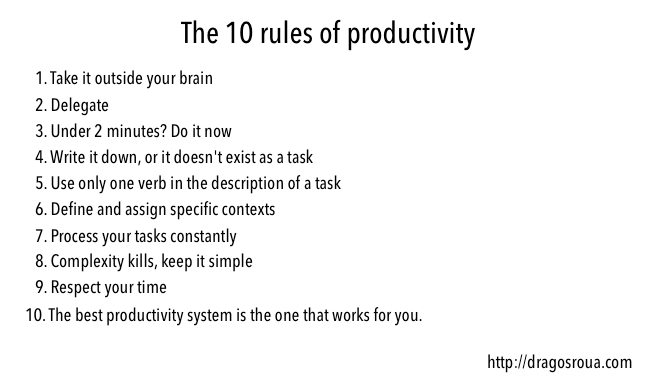 As an early GTD adopter and as a long time follower of my own productivity framework (Assess – Decide – Do) I came to realize that, beyond any technique or framework, there are a few rules that need to be respected if you really want to be productive. So, without further ado, here are the 10 golden rules of productivity:

1. Your Brain Is Better At Creating Stuff Than At Remembering Or Planning Stuff

So don’t use it as a rolodex. Your brain wasn’t designed to do this. A rolodex was designed to do this, by the way, otherwise, we wouldn’t have it, right? Doh. As simple as an explanation this is, you’d be amazed by the amount of people who are graciously ignoring it. “Ok, I’ll remember that. Sure thing.” Yeah, right.

The first golden rule of productivity is to have everything you need to do contained in a safe system, outside of your brain. The keyword here is not brain, but “outside”. It may be pen and paper, or it may be the newest latest app on your fancy iPhone X, it doesn’t matter. As long as you will keep it in a place where you can safely access it and process it. Use your brain to do what it does best: to create. And use other tools to help you remember stuff.

2. For Each Specific Task There Is A Specific Person

And that person is not necessarily you. This is the second most popular reason for catastrophic productivity: people won’t delegate. By fear of poor results, by ignorance, by millions of other reasons reasons. The only logical outcome of this approach is that, at some point, you will have so much on your plate, that your plate will break down. Your plate is you, in this case.  You will collapse at some point.

Delegating is tricky, I admit. There is an art and a science of delegation. We wouldn’t have time to cover even one percent of it on such a short blog post, hence the reason for you to get better at it. But we may use a rule of thumb: delegation should always occur before the burn out. If you start delegating after you’ve been burned out, that’s a sign you’re not yet convinced. You’re not proactive. You’re doing it simply because you crashed. So, be proactive. Start to delegate early. And do your homework. Learn how to properly delegate.

3. If It Can Be Done In The Next Two Minutes, Just Do It

This is probably the most important thing I learned from GTD. The technique has many new and innovative approaches, but, for me, this simple rule seemed to carry most of the benefits. Because it forces you to put a time evaluation on each and every task you have to do. And that’s a huge game shifter. You have to think in terms of “how long it will take to do this”, instead of “how much I like to do this”.

And if you realize you could get away with it in only 2 minutes, “how much would I like to do this” becomes irrelevant. I surprised myself doing things I didn’t like (just because I knew it wouldn’t take longer than 2 minutes and then I will have much more time to get back to the stuff I really enjoyed doing). So, try to forecast accurately the amount of time you’ll spend on your tasks and, if it’s less than 2 minutes, stop the thinking thread in your mind, and just do it.

4. If It’s Not Written Down, It Doesn’t Exist

A safe productivity system, outside of your brain, as the number one rule states, is useless if you don’t use it. So, if you think at doing something, but you don’t take it out of your brain, it doesn’t really exists. This is not a simple “just use that system” rule, it’s more of a lifestyle choice. A very cumbersome choice, in the beginning. Because you will literally have to stop the moment you think of doing something and empty your brain form it. And that’s kinda strange. But very, very effective, in the long term.

Putting everything in written form creates a very subtle form of accountability. If we think about doing something, without putting it in written form, then you’re just daydreaming. It’s ok. You don’t have any responsibility. But if you’re writing it down, assign a due date and a priority to it (at least that) then your brain will start to feel accountable. You may end up doing that or not, but as long as you have it written, you committed to it somehow.

One of the simplest, yet easiest to trespass rules from the decalogue: just use a single verb in the task description. If you use more than one, then you have more than one task. And what is the problem, you asked? Well, the problem is that, way more often than you think, you can only do one part of the task, with the second one left suspended. Hence, the task will remain in a limbo: you started to work at it, but you don’t know when you’ll finish.

Also, the moment you realize you have more than two verbs in a task, it may be the moment to think in terms of projects, not only tasks. You know, grouping all those tasks under a common semantic denominator (gosh, that was an awful wording for such a simple word like “title”, huh). Keeping this habit will develop in time an “atomic” approach towards doing stuff that will translate in a lot more clarity.

6. Identify And Honor Each Task Context

We live in different contexts (luckily). There is one context where we work, for instance, and another context where we live (most of the time). So, assigning the proper context to each task gives you this immersive feeling that you are in the right place at the right time. Not using contexts at all, on the other side, creates an unconscious pressure, the feeling that you still have tasks on your agenda and you won’t be able to finish them in time.

Now, properly choosing your contexts is a completely different thing. When you learn about contexts, the tendency is to create a context for each and every location you’re spending time in. Or for each and every category of work your perform. This is wrong. This is just adding an unnecessary layer of complexity over such a simple and useful concept. Since I don’t have space in this blog post to give you more details, you can read more about how to set up your gtd contexts here.

7. Unprocessed Items Are Eating You. Seriously.

By “unprocessed item” I understand tasks that haven’t been touched for a while. Let’s say months. Or years. We all have these types of tasks in the beginning. And it’s ok. But mind my words here: sooner or late they’ll eat you. Every task that is not processed (either done, postponed or deleted from the system) is creating a burden. It’s like they’re adding weight to your system. If you keep piling those unprocessed items, you’ll become obese. And obese people are basically eaten out by their own fat.

So, get rid of any unprocessed items in your system. Like I said:  either cross them off, by doing them, either postpone them  or delete them.

8. If It Creates More Stuff Than It Solves, The Task Must Be Discarded / Reassesed

The purpose of each task is to solve a specific problem. Some tasks may be  chained, and at the end of each one, you will attach, in a natural way, another one. Effective, scalable projects are built like that. But if at the end of a task we find more stuff to do than we had when we started, well, we now have a bigger problem. It shouldn’t be like this.

The “task diarrhea” as I like to call this, is something that happens a lot to productivity junkies (people who are addicted to do stuff just because, you know). Many have hundreds of thousands of microtasks chained together in endless strings. Of course, they end up by erasing everything and starting from scratch. But even if you are not a productivity junkie and you notice that by solving one task, you’re in fact creating 10 more problems, you should seriously reassess that task.

Maybe your time schedule is different than that, but you got the idea. Keep it in a certain time structure and be very, very keen about that. Respect it. When the day ends, break the door on your way out, if you have to. One of the most important consequences of that is you will have to get better at stuff. You will be forced to. As counterintuitive as it may seem, containing your work in a constricting framework will make you better at it.

There is this pitching event I’m organizing for almost 4 years now, and, within this event, there are some pitching slots: people get to present their ideas to the audience. From the moment we started Open Connect, until today, the pitches are limited to 1 minute (exactly, 1 minute) each. The result: over the weeks, months, years people got really, really good at presenting their ideas in only one minute. They evolved tremendously.

10. The Best Productivity Framework Is The One That Works For You

Just don’t get fancy, don’t adopt each and every new technique or approach or formula, just because it sounds nice. It may even be nice. But you don’t know if it’s good for you. And that’s what counts. I met people who were incredibly productive just with pen and paper, and also met productivity “junkies” with 3 frameworks implemented over 4 devices, who could barely get to the end of the day.

As in any other area of your life, the search for the best productivity technique will plateau at some point. It may take 6 months or two years, but, at some point, you should get comfortable with a certain set of techniques and tools. Just stick with what works, because, you know how they say: “if it’s working, don’t break it”.

Well, that was it. If you have something to add to these rules (or, even better, if you want to challenge some of them) feel free to leave a comment. I’d love to debate.

Oh, one more thing. If you want to avoid upfront all these productivity traps that I’ve been hinting at in this article, well, you can just download this ebook for free. It usually sells for $6.99 on Amazon, Kindle and iBookStore, but you can get it for free, if you subscribe to future updates. Just click on the cover to find out more.