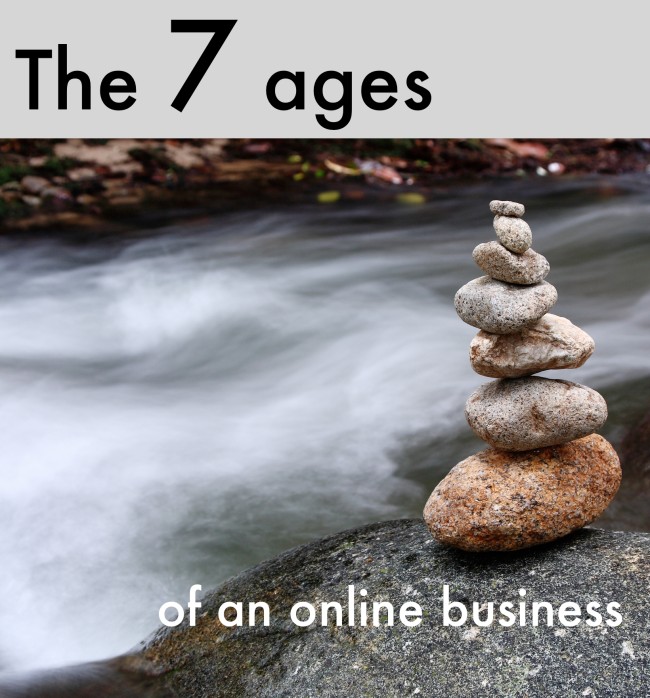 I had a business for 10 years. I started it from the scratch, financing it by using the 3 F’s (family, friends and fools) and managed it until I decided it’s time to sell, buying my own freedom. It was one of the most interesting periods in my life and one of the most fulfilling either. In today’s post I’ll share something I learned during this 10 years: the 7 ages of your business.

Because, like every other thing which is born, raised and fulfilled, every business has its own life and its own stages. The following is more or less an entrepreneur perspective, it’s a view from somebody who decides to start his own business, but it can be also applied to any other perspective (investors, managers, employees).

This is the first stage of your business. It’s the first weeks or months, a period in which the deep, almost irrational exhilaration is simply unbalanced by any other feeling you have. The joy of being your own boss, the fascination of seeing your ideas coming to fruition, the faith that everything is possible are simply overwhelming. During the first weeks of my business I used to compare this stage with sex, in terms of thrill. Entrepreneurship being better than sex, of course.

In this stage you don’t know almost anything about the processes in your business, nor about your clients. You don’t have a clear understanding of the cash-flow notion, hence the cash-flow will be almost invisible. You may start it with an initial funding or you can start it out of nothing, as I did, but it’s certain that in the first weeks or months, you won’t really have a cash-flow. And you also won’t give a dime on it.

Also, in this age, you act out of gut, rather than calculus. It’s the most intuitive part of a business, and most of the time you are right. The most important and effective employees I had were hired during the first, enthusiast phase of my business. I didn’t know how to run a hiring interview and all I knew was: “Do you know to do that? Let’s work together!”. And it worked.

During this stage you don’t have visible results either. All you have is a deep desire to change the world and prove your value.

After the first weeks or months of enthusiasm comes the need to survive. You soon realize you have bills to pay. And then you start acting like a businessman but only at the surface, visible level. You’re obsessed with formal evidence of having a business: stamp, contracts, business cards, logos. You run for meetings and try to meet as many similar people as you can, regardless of their real value for your business.

You still have no understanding of your company’s processes, and you still don’t know about your clients, although you start to feel the conceptual need for somebody who should pay your bills (that will be your clients, of course). During this period, your cash-flow is a mess. Not knowing your processes means you don’t know where to put you money and also you don’t know from where your money comes. This is the time where you start to understand the terms “financial catastrophe”.

You are floating above the reality and try a mimetic approach, you do anything that “feels” like a business, regardless of the real business value. Hence, it’s natural that your decisions won’t benefit the business much.

During this time you made the most ridiculous decisions, by closing bad deals, attracting dishonest clients and hiring incapable employees. You do this out of naivety, by playing as somebody you’re not. Yet.

Hopefully, this naivety period last only a few months, until you realize you made the worst decisions ever and stop. After the naivety period comes the cold shower called “Attention”. This is the stage in which you are starting to actually pay attention to what you’re doing. Enthusiasm was gone and naivety proved to be a no gamer. You’re opening your eyes, take a couple a steps back and try to look around. If you lost significant amount of money you’re also starting the recovering process.

In this stage you are starting to identify processes. Most of the time, you are closing deals which are giving you money back. Of course, the deals are still fluctuating, because you’re only starting to learn and so is your cash-flow. You win some, you lose some. But out of this fluctuation experience start to rise. This attention period usually lasts about 1-2 years.

I know that during this attention period of my business I spent a lot more time analyzing than doing. Most of the activities will be circling around analyze and extracting data, and very few will be about actually doing something, like signing contracts and working for clients. It’s like starting to aim several times and shoot only when you’re sure.

During the attention period of my business I closed some of the best partnerships and made some of my most radical changes in the employee structure. Still lost a lot of money and opportunities but I did it consciously and learned some lessons.

Lessons which proved to be extremely helpful in the next stage, which is the maturity stage. This stage is one of the most fulfilling and is also one with a constant positive cash-flow. At this stage you know all the processes in your company, from hiring, to product creation and promotion, up to selling and investing. The attention period is showing its results: you learned and now you apply. Usually, during this stage you also make break-even, meaning you get to cover all your expenses so far, including the initial investment.

The maturity period lasted around 3 years for me. At this stage, the products which proved to have potential become predictable. We knew from one year to another that we could have a growth and also predict that growth accurately enough. During this period I had partnerships going on auto-pilot, and most of the tasks in the company were so smooth that I barely noticed them.

Maturity is also one of the most enjoyable periods. If it should be compared with something, the first, enthusiastic period is the closest one, only this time enthusiasm is backed up by reality. The feeling of seeing all the processes interconnecting, having a steady team of employees and a loyal pool of clients are giving you a terrific sense of self-confidence.

The biggest trap of the maturity period is to think you’re there, that you “DID IT”. Because you didn’t.

Maturity period proves that you cover well your niche. But it also brings you something that you never thought about: expansion. You soon realize you only have 2 options for your business: either cover well your niche and remain a respected dwarf, either expand and win more respect and stature. One of the effects of the clarity maturity brings in is that you can predict now that if you don’t move, you’ll freeze.

During this period you start to stretch the product line or to expand your services somehow. It’s a very dangerous phase and it relates a lot with the naivety stage. You don’t really know how it will work, but you still start stretching, because, well… because you feel the breathe of the competition. That forces you to close some very high-level partnerships, attack new markets and start new processes in your company.

The expansion stage is one of the most dangerous because you are striving to become number one among your competitors, and sometimes forget that you have to just be there for your clients. But if you manage to make them both: being number one in front of competitors and still remaining loyal to your customers, you’re in for a treat, and we’ll see what this treat is in the next stage.

During this phase your cash-flow is moderately positive. You have to invest a lot and sometimes you can lose big times. I know I did. But I managed to come back because the maturity period was long enough to provide a stable flow of contracts and income.

If you did it through here, something magic happens. Well, it’s not magic at all, because you worked years for that, but I still like how it sounds: something magic. After years of hard work, you finally manage to be the leader in your market. For me, to become leader on the car portals in Romania took about 5-6 years. But I did it.

During the leadership period you experience a highly positive cash-flow. All the partnerships you established in the early stages of your company now are accumulating. You are actually making money out ofÂ  any move you do. You have almost no costs in attracting new clients, you get promoted by word of mouth. Your market is starting to be confounded with your product. You created a brand.

But the downside of this is that you begin to be copied. Everybody wants to be the leader, so your own success brings in a plethora of followers and clones. A lot of guys will want to identically replicate your success, hence they will be identically copy you. The biggest pressure you’ll feel in the leadership age is not from the inside, but from the outside: it’s the competition.

The leadership period was around 3 years for my business.

This is the final stage of the business. At this level, the market is so crowded and the clients so pressured that it’s barely worth continuing. You do it only for covering your expenses and to keep competition at a certain distance. From a human perspective, as an entrepreneur, this is the stage when your efforts are worthless. No thrill, no new discoveries, no unpredictable items, no creativity.

In the exhaustion phase of a business you’ll usually be able to predict the market by staring at the ceiling and know your clients better than your pockets. There is nothing new around and everything was transformed in a fight for 1 or 2 percent market share. Luckily, the cash-flow is steadily positive, but the pressure for the other players is huge. Not only in terms of clients but also in terms of employees. At this stage you experience the higher employee fluctuation. Everybody is hunting everybody.

During the exhausting phase you’re not doing business for you, but mostly for keeping others out of your head.

Took me about 10 years to reach this stage and only remained in it for less than 1 year.

The 7 Ages Of A Business – The Book

A few years after I wrote this post, a few readers asked me if I can elaborate on each of the ages. I did it and the result was a tiny little book that you can buy right now.