I spent the night in Kyoto in a small backpackers hostel, near Gion. It was my first night at a backpackers hostel but I found the experience quite enjoyable. I met a few interesting people and I really got to rest my feet, after what I calculated to be more than 12-13 kilometers of walking in Kyoto.

In the morning, I started to walk again and just wandered around the wonderful traditional Japanese houses until 12:30. At 13:00 it was scheduled the first tea ceremony at the tea house I just discovered the other day. I was pretty determined not to miss this.

So, at 12:30 I was again at the entrance of the small tea house, looking for the schedule. Everything seemed identical with yesterday. Today was Thursday, so it was supposed to be opened. So, only half an hour until the event. Enough time for a small walk. I breathed deeply, turned on my heels and I was almost bumped into a young lady on a bicycle. Didn’t hear her coming and noticed she had a small flower in a flower pot.

I smiled and wanted to give a Ohayo Gozaimasu salute, when she asked in a crystal clear English: “Are you here for the Tea Ceremony?”. Definitely, my odds were much more positive than yesterday. “Yes” I answered with joy. “Well, I wait you here in half an hour” the young lady said.

After 30 minutes here I am, opening the door of the little house. Took off my shoes and made my entrance in a roomÂ  covered with tatamis, traditional Japanese mats. Inside there were another 3 persons, a lady in between ages and a young couple. I sat down and introduced myself. The lady proved to be from Australia, mate, and the young couple from Great Britain.

The house was made on wood, an old traditional house, almost identical with the ones I photographed the other day on Shimbashidori street. On one of the walls of the first room there was a small and simple floral arrangement. The room was continued with another one, on which there were some tea tools, like pots and other things I couldn’t name.

We chatted a little and then a young lady in kimono entered and saluted.

“Well, I think there are some persons which are still to come” she said, and it was only then when I recognized the lady on the bicycle. She was almost unrecognizable with this kimono. Exactly at that moment another young couple entered the house. They proved to be from Switzerland. So, here we are, 6 persons waiting for a tea ceremony to be performed.

Without further ado, Akiko, that was the name of the young woman, started the ceremony.

“In every tea ceremony, you bring with you 3 utensils. These are: a fan, a piece of paper and a small knife.

The fan is not for cooling, is a special one and is smaller than a usual fan. You do not open it during the ceremony and you will use it only to put it in front of you, bow and salute. The fan is a symbol of respect.

The paper will be needed for sweets. During the tea ceremony, sweets are served, and you must have a way to put them in front of you.

And the knife will be needed to cut the sweets. Is every one of you bringing those utensils?”

Akiko smiled, of course no one knew about that so she assured us that everything was already taken care of. She gave each of us a piece of paper and we saluted using a small fan. The Tea Ceremony was started. 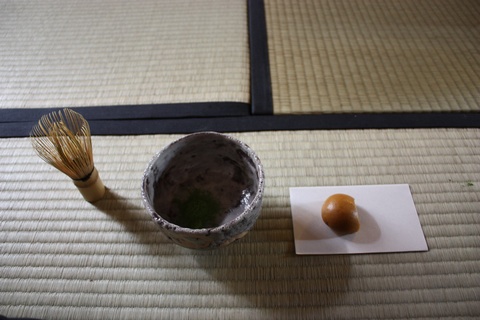 “You know what are the Tea Ceremony principles?” Akiko asked after we all were comfortable, with the piece of paper waiting for the sweets and with the introductory salute performed. Well, even if some of use knew the principles, we all let her telling us all about that. She had a calm voice and a relaxed posture. Later on, the posture would become almost hypnotic.

“The first principle is “Wa”, which means harmony.

The second principle is “Kei”, which means respect.

The third principle is “Sei”, which means purity.

The fourth principle is “Jaku” which means tranquility.

We do this ceremony with and for harmony, with and by respect, using purified tools in order to purify our lives and we do it in tranquility.”

Slowly, all of this was starting to fall into pieces. As Akiko started to unfold the principles and the inner workings of tea ceremony, I started to feel an alignment vibration. The house, the utensils, Akiko’s voice and their words were all coming together in a new structure, completely different from the outside world. Yeap, the world from which I came minutes ago was already “outside world”.

“A tipical tea room has only 4 and a half tatamis” said Akiko, after we all took a moment of reflection to understand the tea ceremony principles.

“You walk in a certain way in a tea room. You never cross a line between two tatamis, and you enter right foot and live left foot”.

As she was talking to us, she was going in and out from a small room behind, bringing in several small tools and also proving us what she was saying. Indeed, she never crossed a tatami and she was always putting her right leg when she was entering and her left foot when she was leaving the room. All these small rules were respected in silence and made from a strange sensation of dance when she was walking around. She seemed to float, most like the geishas I saw the other day on the streets of Gion.

“Historically, a tea house was separated from a living house, and much smaller. A normal man should bow in order to get into a house. Also, a sword wouldn’t have place in it. Samurais were required to leave their swords outside the tea house and bow before entering in. It was, and still is, a place of peace and tranquility”.

As Akiko spoked I realized that the room we were in had only 4 and a half tatamis. It was a sudden realization, and I don’t remember counting the tatamis.

“We perform this at two specific moments of the day: in the morning and in the evening. During the summer we start this in morning, at 6 AM. Sometimes, a tea ceremony can last for 4 hours. During winter, we start this at 6 PM.”

“I will start performing tea ceremony now” Akiko said after a few seconds of silence. “One more word: you drink tea in a certain way. This is how it works: each guest receive the bowl from left to right. When you receive your tea bowl, you put it on the left side, near the next guest without a bowl, say “Osaki-ne”, which means “Sorry I will start before you”, wait a little and then take a bowl with both hands. Before drinking rotate the bowl clockwise two times. Then drink. When you finished, before putting down the bowl, rotate it counter-clockwise two times again.”

Another dance. This time performed by us. But before actually getting to drink and performe that dance on our owns, Akiko started to make tea.

What followed was a sequence from another world. Her moves were gracious and effective at the same time. Each move had its role and it was like a complicated poem performed by the whole body. And every tiny gesture had a precise role and specific way to be performed. Each movement, from taking water to wiping the tea spoon had its own set of rules. It just couldn’t have been performed the other way around. Those postures were the results of hundreds of years of performance. In fact, it was not a performance, it was a ceremony. And what was celebrated was the joy of life.

After Akiko finished to make the first bowl of tea, she left on the tatami the last 2 utensils, walked backwards to the room exit, bowed and leaved. We were supposed to admire the last 2 utensils in silence without the tea ceremony performer. After a few moments she was back in the room and started to put tea in our bowls. 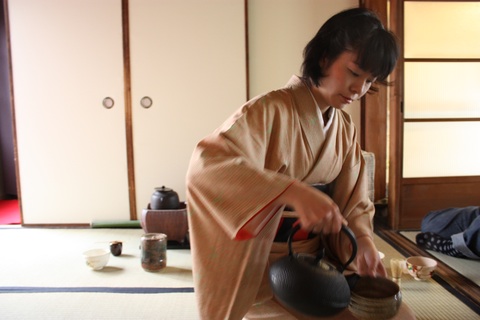 “The rotation is very important”, Akiko said. “Each bowl has its mark and a unique design. By rotating it you make the design visible to other guests. It’s a form of respect.”

We took a bite of the cookie and then sipped some tea.

“You are supposed to sip loudly”, Akiko smiled. “I know that in Western culture sipping loudly is a sign of disrespect, but remember, in a tea ceremony nobody speaks. Sipping loudly is the only audible form of communicating to the host that the tea is good.”

From this point, I felt the tea ceremony was done. I don’t know how much time it lasted, but I felt it like a time escape anyway. What happened seemed to have not been bounded by time.

As I started to look for my stuff in preparation to leave the tea house, I realized that I was in an almost hypnotic state. What started with small and subtle suggestions evolved in a full hypnotic experience.

Tea ceremony is just another form of meditation. And the fact that is performed by another person makes you resonate with that persons vibration like in a form of spiritual ritual. It’s a form of communication, of respect and of purity. It’s one of the most intense experiences I had so far in my entire life.

As I walked outside the tea house, the other reality started to invade my personal space. I will certainly get more involved in this, I said to myself.

11 thoughts on “The Trip To Japan – Tea Ceremony”