The trip to Europe started pretty well, without any problems other than the usual routine of keeping a 3 year old busy in a car, while driving more than 2-3 hours in a row. We entered Hungary around 3 PM and reached Budapest around 6;30 PM. Luckily, Diana searched for some hotels in advance so we had a pretty rough idea of where we have to go. We found the hotel pretty fast (thanks to modern technology, also known as GPS 🙂 ) and checked in.

We were so eager to see new things that we decided to go on a boat tour instantly. I’m not a huge fan of tours, on the contrary, but we had to accommodate not only 2 adults but a toddler too. A boat tour seemed like a place where a toddler could stay still, enjoy the scenery and not get bored, all three at the same time. The tour took all in all around one hour and we had the chance to see some interesting stuff. First of all, there were the Budapest bridges (all reconstructed after being blown during the World War 2):

and of course the Parliament building:

Interesting enough, we learned that the Parliament building was simetrically perfect, made from 2 identical structures, corresponding to the 2 Parliament chambers. Today, the Hungarian Parliament has only one chamber though.

I found the boat tour a little bit noisy, not only because of the guide, an old lady who was talking alternatively English and German, but also because of the tourists, who seemed to pay little if no interest to the guide. All in all, it was an interesting activity, and I do learned a little bit about Budapest.

On the way back to the hotel we walked on Vachy Utca, one of the traditional shopping and entertainment streets of Budapest. At the end of it, we saw a group of young dancers performing in the middle of the street. And they were not bad at all:

Budapest – The Day After

Next day we planned to leave Budapest for Vienna. We had breakfast – a very good one, including a large variety of fruits and vegetables – and decided we have time for a bus tour also. We saw some red buses branded “Hop On – Hop Off” and thought it would be a good idea to try them. The checkout was at 12:00 PM and we embarked on that tour at 10:30 AM. The tour was supposed to last 2 hours. Half an hour over the normal checkout time is not such a big deal.

The problem with the bus tour was that we didn’t find place on the top platform on the bus, which was open. Instead, we had to stay for most of the tour on the lower platform, which was a little hotter for our tastes. We do had the chance to see some new stuff, especially on the hilly part of the city, also known as Buda. Some new blending with the old:

and also a view from above of the city, including a good panorama of the Danube, the main river (which goes to the Black Sea in Romania):

The bus tour was not as enjoyable as the boat tour, and I think the pressure of checking out was one of the reasons. Adding heat to it, and it made for a quite irritating experience. We were happy to leave the hotel around 1:30 and search for a place to eat. After we had lunch at a small coffee shop near the hotel, we headed for Vienna.

As for the Budapest, Vienna was one of the cities I saw from the speed of my car while driving to attend to various auto shows across Europe, back when I had the biggest car portal in Romania. Never had the chance to stop and actually seeing them. So, having at least 2 days to actually enjoy the city was a great thing.

After we got to the city, we started to look for the hotel. That was the first surprise. We actually had to look for 3 hotels, until we found one suitable. The ones we wanted were either fully booked either not offering apartments or at least rooms with connecting doors.

After searching around 2 hours, we finally set up somewhere near the old city. We were all very hungry so we just left the luggage in the room and started to hunt for a restaurant. Luckily, it seemed we reached a very restaurants rich area, we found one within 30 seconds of walking from our hotel. After having a delicious dinner (and some beer for me) we had a short walk around the hotel. Nice streets and quiet area:

Next day we decided to visit the Vienna Zoo. Famous around the world and one of the oldest in Europe, seemed like a good intersection point for all trip attendants, from 3 to “30 something” year old :-).

The first impression was fantastic:

That’s just one small part of the beautiful garden which surrounds the Zoo, and the whole Schonnbrunn area.

The Zoo was fantastic, but I won’t post any pictures. While I enjoyed the tour and Bianca’s reactions seeing all those exotic animals, the idea of keeping them locked for our viewing pleasure is not so appealing to me. Even if the animales had a fantastic life environment and even if they seemed quite happy with this arrangement.

So, after 2 hours of walking, back to hotel, eating and the afternoon siesta. The next objective was DonauTurm, one of the tallest buildings in Vienna (if not the tallest). One neat thing about this skytower is the fact that parts of it are spinning. The restaurant and the caffe, to be more precise. They’re spinning at a very low speed, but within an hour you’re making at least 2 complete rounds. This is a picture of an industrial area:

while this is a picture (with the Sun in the front, of course) of a residential area, took from the same window, one hour later:

The food was fantastic, the view was gorgeous, the only problem was that we didn’t plan our way back from there. The tower is somewhere outside Vienna, it was getting dark pretty fast, and we didn’t know how to get back to the hotel. We decided not to get back directly, and have a stop at Prater, the famous entertainment park of Vienna. Either way, we had no idea how to get there. And we felt a little bit lost. Despite the feeling, we did take some time to make a picture of the DonauTurm:

and another one of the beautiful sunset light: 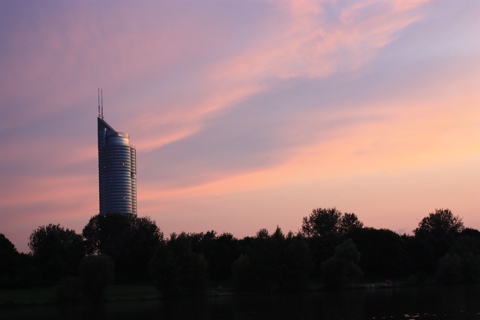 After a little bit of searching and asking some locals, we found our way to a subway (which is called “U” in Vienna) and finally reached to Prater. That is another place from which I won’t post pictures, but this time because I really didn’t have a second to take them :-). We jumped together in one of the highest (yet, safest) wheels in the park. We shoot for a teddy bear at a shooting booth. We watched other people having fun. We had fun. Yes, Prater was nice. Bianca enjoyed it. I enjoyed it. Diana enjoyed it. We got back to the hotel almost sleeping.

That was the second day of the trip. By the time you will read this we will be on our way to Prague.

9 thoughts on “Trip To Europe: Budapest And Vienna (part one)”