We left Vienna around 3PM, after visiting a little bit of Schonbrunn and eating. Czech Republic is only 30 kilometers away from Vienna and so we got there pretty fast. The Czech border welcome us with a fine selection of night clubs and obvious signs about “new girls every night”. Other than that the cities looked cleaner and decent. The architecture was absolutely fabulous. We got to Prague around 7 PM, driving slowly and looking around.

In Prague, the quest for a hotel started again. We already had some ideas (and, of course, addresses) of what we want, but the Internet can be sometimes so different than the real world. Meaning the hotel were either fully booked, either too far, either smaller than we saw on the Internet and so on… On top of that was driving in the old center of Prague, with a lot of one way streets and names in a completely new language. At some point, driving around in circles, we spotted a small hotel on a small street. And a big sign: “last rooms available”.

I got inÂ  and after a short talk with the lady at the reception we were in. The hotel, called “U Zlatohe Jelene” (the golden deer, I suppose) was absolutely incredible. We took an apartment (for a price of a normal room in Budapest) and what we found was gorgeous: old, high rooms (I suppose the ceiling was somewhere at 4 meters) and the strangest bathroom I ever saw: I had to go down an old wood stair to reach it, but once there, everything was brand new and made with quality materials).

The only inconvenient was parking. I had to take the car in an underground parking of a mall, 200 meters away from the hotel. But since we were decided to walk and not use the car too much, that was acceptable. We went out and eat, starting to explore a little bit the surroundings. It was already pretty late when we got back in the room, but we had quite a good idea about what we’re going to do the next day.

After we woke up, we had breakfast at the hotel. The breakfast room was in another building, which was also pretty interesting. Took our cameras, and started to explore Prague’s old town:

And that would be one of the oldest gothic gates of the city. Every street has fantastic buildings:

We soon realized we were like 20 meters from a large square, featuring a big astronomical clock:

We walked about 10 minutes and got to a bridge. We crossed the main river, Vltava, and headed towards what seemed a funicular or something like this. After waiting in the queue for about 15 minutes, we were up on a big hill, on the other side of the city. In front of us, a strange tower, resembling Eiffel Tower, seemed like an interesting place. It was called Petrin Observation Tower, and besides being pretty crowded it had a little bit of incentive, so to speak: the elevator was out of order: 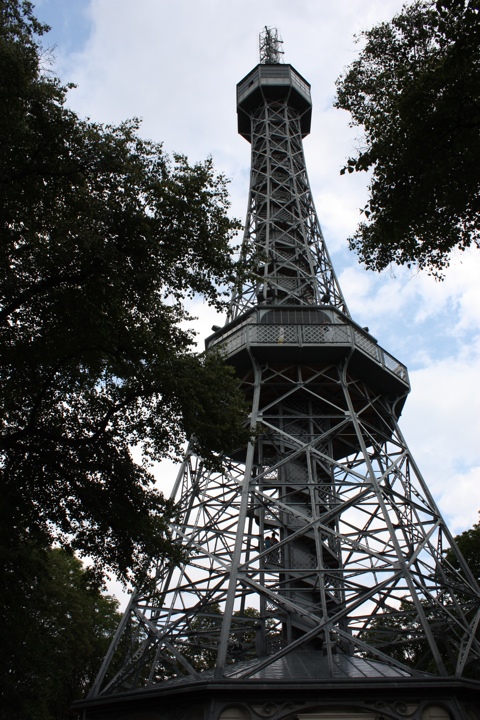 I climbed up the stairs (didn’t count, but it took around 3-4 minutes to get up to the top) only to find an incredible view of the city. First, there was the Prague’s Castle (the biggest castle in the world): 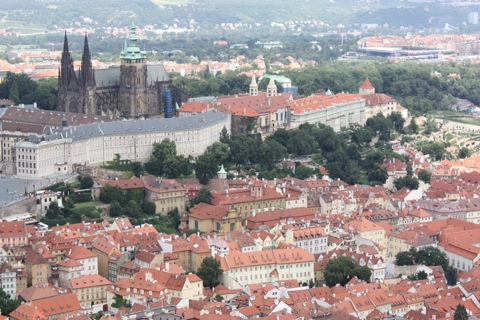 and then was this view of Vltava and its bridges:

We sat down for about half an hour, having drinks at the bottom of the tower and then decided it’s time to visit the castle. Took us around 35 minutes to get down from the hill by walking, including some stops at a small souvenir shop and a at a small fountain.

The castle was absolutely gorgeous and the Cathedral of St. Vitus almost unbelievable:

The cathedral had some parts in restauration, but even so, it was looking fantastic from any angle:

Near the castle exit there was a small buffet and a nice looking red building:

We sat at the buffet and ate. This buffet stop and the next hour will be covered in a later post, because it was something completely unexpected and really, really fun. So, stay tuned for this episode in the next days. For now, let’s assume we’re one hour late, walking around Prague historical center, watching old streets:

or even old gray castles:

As we approached the old city area, where our hotel was located, we started to spot other interesting and strange things, like this costumed guy in front of a restaurant:

I’m sure there must be a pretty good reason for him to be dressed like this, but I’m telling you, I ain’t gonna eat there :-). On another street, a stone guy was relaxing on a bench:

Soon we got near our church:

but this time taking new and complicated routes on the small streets of the old city:

It was slowly starting to get dark:

while the astrologer tour was still dominating the square:

And soon it was really, really dark. Guided by the lights, we got in our hotel room:

15 thoughts on “Trip To Europe – Prague”