A couple of weeks ago, a banana duct-taped on a wall, named the “Comedian”, was sold as an art piece for $120.000. The ripples of this event were instant, viral and, for what it looks like, persistent, with no sign of slowing down.

Most of the comments on the internet were pointing at the absurdity of the “work”, at the infantilism of our world, which can take in such nonsense and label it art, and some of them even went up to money laundering schemes involving art and other conspiracy theories. One thing is sure: the vast majority of people was in shock.

After the initial buzz, I decided to take my shot at this, giving you just my two cents on this art and bananas show worth $120.000.

Let’s start with the picture below. It’s a famous portrait of the (also) famous post-impressionist artist Vincent van Gogh. Today, Van Gogh is seen as one of the most influential figures in modern art, but, if you take 2 minutes to read his Wikipedia entry, you will find this sentence: “Van Gogh was unsuccessful during his lifetime, and was considered a madman and a failure.” This sentence will become important by the end of the article, bear with me.

Back to the painting. 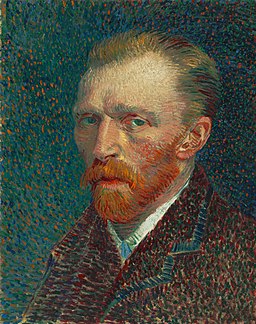 What you see on the left is the face of a man, depicted in a specific drawing style (which, incidentally, was created by the very man depicted in it).

It’s in a rectangular form and consists of color pigments held together within this area.

And that’s pretty much all there is to it.

Now let’s get back to the banana: what we see in the featured image of this post is a yellow shape of a fruit, in relief, holding together with the aid of duct-tape.

But are they both art?

On Art, Bananas And “The Zoom Level”

The only difference between that banana duct-taped on the wall and Van Gogh’s portrait is the zoom level.

If we zoom back enough to see the banana just as another collection of colors holding together on a surface, there you have it: there is no difference whatsoever between this thing and that thing. They’re both figments of color on a surface.

Ok, one may ask, but what about the decay period of the banana? In about a week, that banana will turn black and start stinking. Well, it’s again about zooming. If we zoom back enough to see Van Gogh’s portrait just as a sheet of paper being destroyed by the inexorable passage of time, turning into dust and literally evaporating itself, there you have it: there is not difference between this thing and that thing.

Ok, but what about perspective, composition and harmony? Aren’t these principles fundamental to what we define as “art”? Ahem. Can you please scroll up to that sentence from Wikipedia? The one in which we learn that Van Gogh was a “madman and a failure”? Perspective, composition and harmony were defined in a certain way during his lifetime, and he was labelled as a madman and a failure, specifically because he didn’t respect those definitions. Van Gogh was also suffering from mental illness and committed suicide, it’s true, and this may have also contributed to his labelling, but the point is that his art wasn’t considered valuable during his lifetime.

Art As A Form Of Convention

Art is a specific convention that takes a lot of time to settle in. It’s not like money, which is a collective hallucination we can all understand pretty fast. Art involves emotion and personal perspectives and these take time to harmonize together. The “entropy” of emotions is higher than the “entropy” of basic needs, those that we can satisfy with money.

And the more disruptive an “art form” is, the longer it takes for the convention to settle in. It’s true that some of these disruptive efforts are never blending into “art” and remain just playgrounds of madmen and failures, but many of them are becoming indeed “art”, and we derive aesthetic pleasure from them, we put enormous financial value on them and we use them as a way to differentiate the human species from other mammals: it’s only “us” who can make art.

Do we have any way to know in advance which of these ramblings are actually maturing in the collective mind as art? Can we know for sure now that this banana duct-taped on the wall will start an art current? Alas, no. It’s only in hindsight that we can define something as “art”, because of the inertia in these factors (emotions and personal perspectives). If enough people are starting to share the same emotions and perspectives (just like the Fauves started to follow in the footsteps of Van Gogh’s art, legitimating him) then we get “infected” and we turn collections of colors on a surface into art.

The bottom line is that there is nothing “coming” from a thing that makes that thing art. There’s no “intrinsic” art.

It’s all happening in our minds. It’s a convention, something that we agree to.

But when the limits of these agreements are challenged, when something pretends to be in a convention, but it’s actually outside of it, like a banana duct-taped on a wall pretending to be a Van Gogh painting, then we get scared. Because convention is how we attach meaning to this world, to reality, to our lives. We see something as existing, because we agree that this thing exists.

The debates on the internet aren’t really about art. They are a form of protesting against the lack of meaning of our lives, an effort to preserve what we already know and to reject what we don’t understand.

It’s the aggressive voice of the guardians of our comfort zones: “don’t go out there, don’t venture into the unknown, stick with what you know and you’ll be fine”.

Of course, we’re never – and nowhere – truly fine. “Fine” is also a convention.